As part of the Serving Abroad, Through Their Eyes photography project and video art portrait, Art in Embassies, along with the Department of Defense and the U.S. State Department, commissioned Lincoln Schatz to create a video montage incorporating audio recordings and photographs of daily life by current and former military and Foreign Service personnel.

The Process for Serving Abroad… Through Their Eyes

These photos were all captured while these personnel were abroad and in active service. Schatz’s work debuted at the U.S Department of State in the fall of 2012, and will later be installed at the new U.S. Embassy in Kabul, Afghanistan. During the process of creating this generative video artwork, Schatz and his team worked alongside staff from the Department of Defense, the State Department and the Art in Embassies program; shaping this project and participating in the selection of photos to be included in the final work for Serving Abroad, Through Their Eyes. 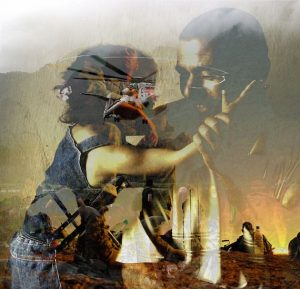 Over the course of several months, audio recordings, recorded by the personnel who had submitted their photos, were being recorded and archived for the final generative video work to be created by Schatz in his studio. Together with the photographs, the audio would be edited and brought into custom designed software in order to create Serving Abroad, Through Their Eyes. Each time the piece begins it is different from the last. This generative video work pulls from thousands of photos and audio recordings to build the final artwork in real-time. There is no loop point, instead a computer creates a unique and never repeating portrait of what it can mean to serve abroad.

A Collaboration is Born

Serving Abroad, Through Their Eyes is a landmark collaboration between the U.S. Department of Defense and the U.S. Department of State’s office of Art in Embassies. Active military and Foreign Service personnel were invited to submit photographs illustrating their life and work abroad, with a focus on friendship, places, faces, loss and triumph. 161 finalists were selected from the 3,200 submitted images. To learn more about the Serving Abroad program on the AIE website.