Helmut Jahn’s, 600 North Fairbanks joins the Chicago skyline, altering it’s character with its presence. In Chicago, skyline and landscape are synonymous. Man-made structures establish some of the highest heights in the otherwise unyielding flatness of the Midwest. Each new building augments the city through scale, function, location and material. This construction will have a significant impact on the Chicago landscape and this video, by Lincoln Schatz, studies that transformation.

The lobby of 600 North Fairbanks features four plasma screens that display approximately 18 months of video. At times eight videos can be playing on these screens. Each video frame displaying a different stage in the building process. Firstly, the video footage was captured in somewhat unique conditions. For example, Schatz attached cameras to cranes, adjacent buildings, towers and any other surface a camera can be mounted to. Because of these unique locations, the resulting video can be dizzying in the range of possible views. Finally Schatz and his team moved these cameras constantly around the construction site. A rich and fascinating visual world of construction is revealed in the resulting footage. 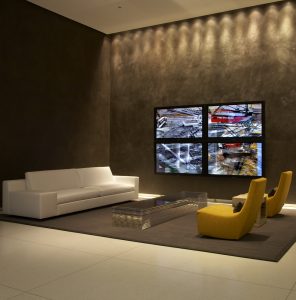 Four cameras mounted on and near the construction site of Helmut Jahn designed 600 North Fairbanks recorded video over time. Multiple cables ran from the site back to Schatz’s studio. Because of this, Schatz and his team were able to monitor and record real-time video throughout the course of the project. From there, as the skyscraper rises in the sky, the materials, machines and laborers take center stage. The artwork mirrors the construction process. Similarly it builds itself from layers of material over time. And in this case, the computer pulls video from the database to construct the building endlessly in real time.

The finished artwork is continuously recombining and manipulating video constantly.  It uses chance and algorithms to create the final artwork in real time. As a result, no two minutes of the artwork are the same. This work, 600 North Fairbanks, extends prior architectural investigations, like Across Time, a generative video for the Spertus Institute, also by Schatz.